The church of St. Paraskevi in Samarina was once the katholikon of the homonymous monastery, which was abandoned at the end of the 19th century. Today, from the original monastery complex, only the katholikon still remains, while the rest of the buildings were built later (20th century). Based on the testimony of an embossed stone inscription, externally placed above the arch of the sanctuary, the construction of the temple dates back to 1713. The church belongs to four-column cross-in-spuare type, with blind domes in the central aisles and “fournika” (small arches) in the corners. It is covered with a gabled roof, initially made of slate slabs which, nowadays, are preserved only in the arch. Its entrance is located on the west side and formed of stone with an embossed perimeter decoration in the shape of a human figure.

The mural paintings of the temple are preserved in the sanctuary and the central dome. The oldest phase of mural painting art, in the late 18th century, is the work of an anonymous painter. In the area of the sanctuary, remarkable is the depiction of the Communion of the Apostles, with the addition of the episode of the departure of Judas, who is dragged by a tragomorphic devil tied with a rope. The episode, inspired by the Gospel of John (Kata Ioanni ιγ΄, 27), rarely found in Byzantine art, becomes widespread in the post-Byzantine years in temples of Epirus and Mount Athos. Τhe representation of the Angelic Liturgy in the domes of the sanctuary is also of the paramount importance. It depicts the Divine Liturgy of Saint Basil the Great and is often found in monuments of the Palaiologos dynasty, as well as in temples of later centuries. A written inscription on the perimeter of the dome of the main church also reveals the date of the decoration in 1821. Based on stylistic elements and the morphology of the inscription, the decoration of the dome can be attributed to the Samaritan painter Michael Anagnostou, who illustrated the adjacent church of Metamorfosis in 1819. The wood-carved and painted decoration on the ceilings of the church is impressive, while the wood-carved and gilded iconostasis dates back to the end of the 18th century. 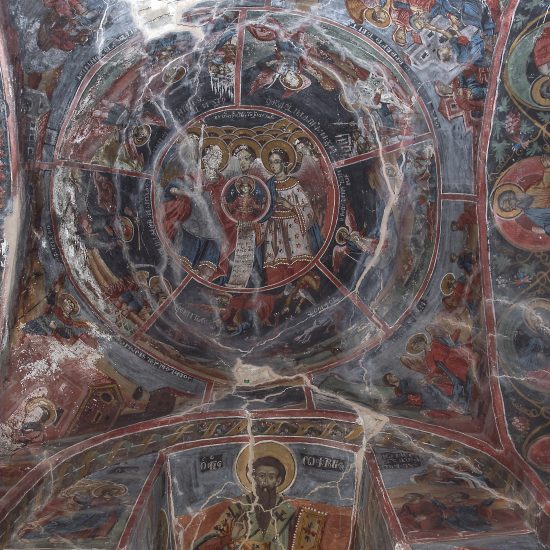 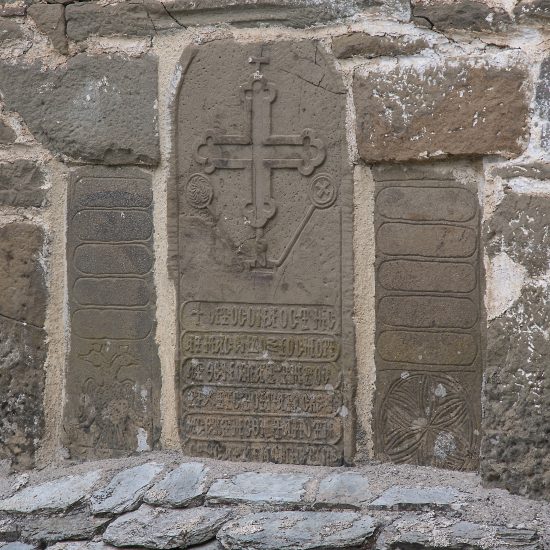 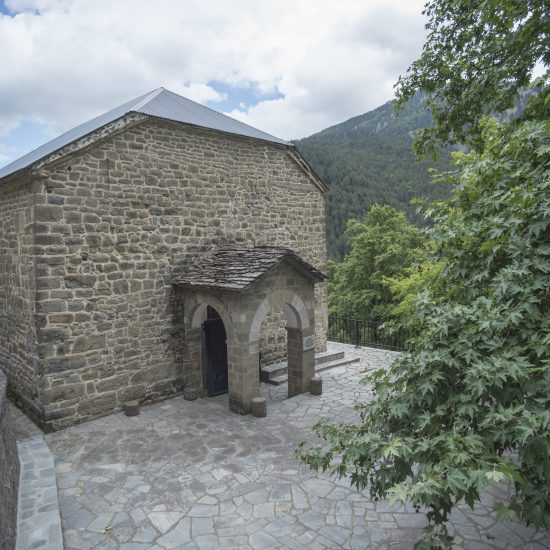